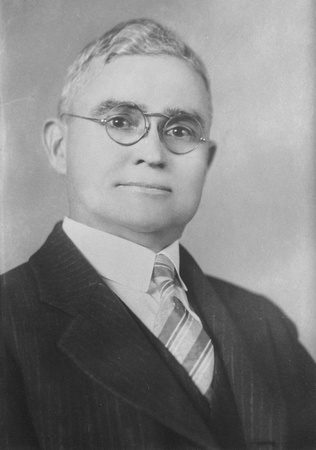 In my last post, I wrote about the grandfather I never knew, so this time I want to speak about Grandpa Rinne who was a big part of our lives until his death in December of 1963 a few weeks after the assassination of John Kennedy.

Carl Henry Rinne was born in 1880 into a large family of German immigrants who found their New World home in Louisville, Kentucky.  Although his first name was Carl, he was always known as Henry and signed his name C. Henry Rinne.  His father, Ernest Rinne, was born in the Prussian region of Germany and emigrated to the US in 1869.  A cabinet maker by trade, the elder Rinne found work in the furniture factories in Louisville.  Grandpa had seven brothers and sisters although two of them did not survive childhood.  Because of his many siblings and the large family of my grandmother, Amelia Peege, my dad grew up among a large extended family of cousins, aunts, and uncles.  Henry and Amelia were married in 1905, and our father, Walter William Rinne, was born in 1909. 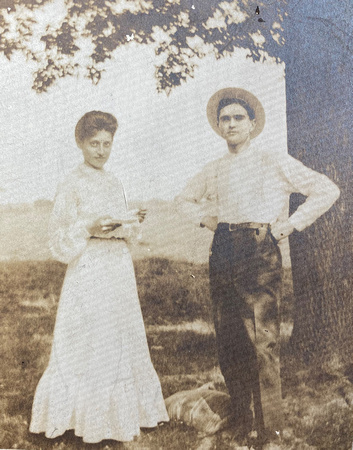 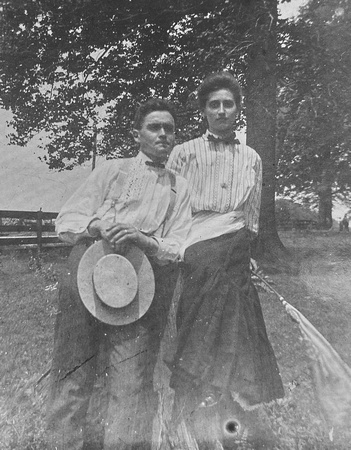 Grandpa loved to tell stories to Paul and me.  He showed us a quarter-sized scar on his forearm where he sustained a compound fracture as boy.  He told us about frog gigging in the wetlands along the Ohio River.  It was the first time I ever knew that people ate frog legs.  He said he and his buddy would sell the frogs to restaurants in Louisville.

When he was about twelve years old (1893), his father took him to Germany to meet his family.  Grandpa had an uncle who was an officer in the Prussian army.  During their visit, the uncle took Grandpa to the company tailor and had him make a uniform for the youngster.  My brother still has the coat, and I have the bayonet that they gave him as a sword to augment the dress uniform.

We also talked baseball—Grandpa’s favorite game.  As I recall, he was an avid St. Louis Cardinals fan and would take the train to Cincinnati to see them play the Reds or head for Chicago to see the Cubs.  They also attended White Sox games to see them play the various American League teams.  Louisville had a strong minor league team, so they saw many of the great players pass through the city before moving up to the majors.  He told me about the Chicago Black Sox scandal of 1919. He loved to talk about the great pitchers like Walter Johnson.  “If you can’t see ‘em, you can’t hit ‘em.”  Ty Cobb, Roger Hornsby, Babe Ruth, Loe Gehrig—he used to talk about all of them so it seemed like I knew them as well as the great players active in my youth (Mickey Mantle, Roger Maris, Willie Mays, Sandy Koufax, Bob Gibson).  I would listen to my father and grandfather discuss baseball for hours on end while sipping on bottles of Oertels ’92.

Peege Family Reunion 1907.  Grandpa is on the far right. 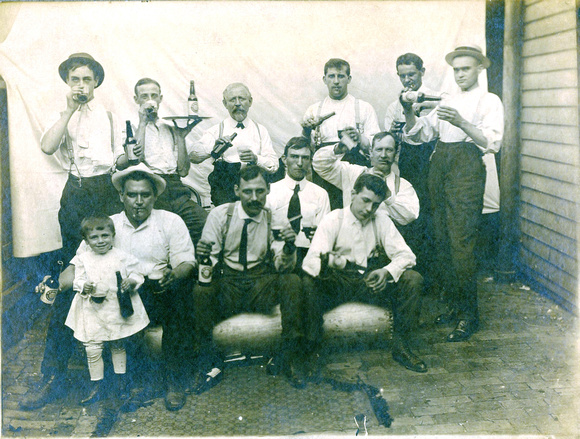 Grandpa was a small business owner.  He bought Globe Furniture in Louisville sometime in the early 1920s only to be wiped out by the Great Depression, but he reopened the store and rebuilt his customer base.  The great Ohio River flood in 1937 caused another setback, destroying much of the downtown business district and the residential areas in the west end. But Grandpa kept going.  He was tenacious.  Finally in the mid 1950s he sold out to his partner Carol Carico.  My folks were always a little miffed that they were not consulted before he retired and felt that he sold out too low.

After retirement, Grandpa spent time in his woodworking shop behind the house at 667 South 35th Street in Louisville.  You can still see the concrete slab back by the alley when you open the address in Google maps.  I guess the structure itself was demolished at some point in the last 60 years. Grandpa made us toys such a horses, guns, and even a bowling alley.  The guns were wooden and were cut using his band-saw.  He also built small pieces of furniture and came to McLean to help my Dad finish the basement in our house that was purchased in 1957.  Grandpa loved to display the American flag.  Our Louisville visits often coincided with the 4th of July, so great celebrations were held in his backyard.  Grandpa taught us how to use carpenter’s tools, always emphasizing safety and choosing the right tool for the job.  I’m sure Paul and I built many a box, drilled a few holes, and somehow sawed a few planks without damaging our fingers or eyes.  One of those boxes found its way into Dad’s darkroom back in McLean.  I stood on that box many times, so I could watch the prints emerge in the developer. 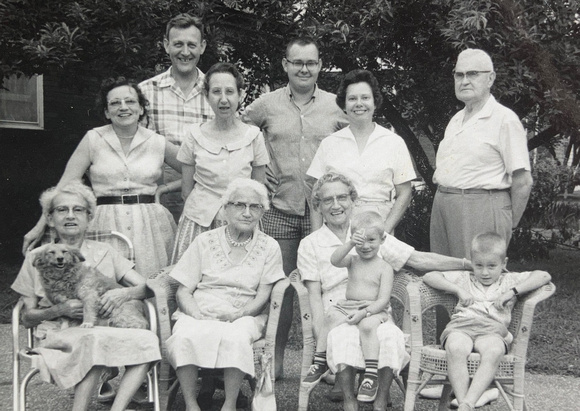 In Louisville August 1960. Grandpa is standing on the far right. That's me in the chair in front of him and Gram with Paul on her lap. To the left of Gram are two of her sisters, Agnes and Laurie.

I should offer a word about our grandmother, Amelia Peege Rinne.  We called her Gram.  She was the quintessential homemaker of the early 20th century.  She cooked on a large gas stove that you had to light with a match (I acquired singed eyebrows after a misadventure with the stove).  She loved us and loved taking care of Grandpa.  The man could not boil water and depended on Gram to do all the cooking.  She taught pre-school age kids in Sunday school and enjoyed bringing Paul and me to her class when we visited.  She helped us memorize the 23rd Psalm.  Unfortunately she had  diabetes (in the family it was called the Peege curse).  On a spring day in 1961, Gram was hurrying to Kroger five blocks from their house to purchase some sugar-free treats, since the A & P nearby did not carry them.  She stepped off the curb in front of an on-coming car.  Her hip was fractured and both legs.  Paul and I visited her in the hospital many times that summer as we stayed in Louisville for several months.  She was in a bed that had a circular frame and allowed to rotate her from back to her stomach to avoid bed sores.  We loved the contraption and were thrilled when we were allowed to witness the process.  I’m sure it was very painful, but our grandmother never uttered a sound.  Our mother took care of the household and Grandpa who kept insisting that Grandma just needed to get back to the house, and “she would be fine.”  She wasn’t.  She had a very rough summer and lingered until the end of August when she died in their home. 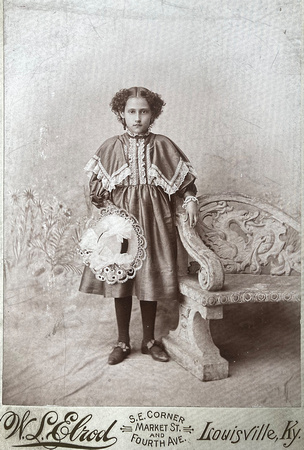 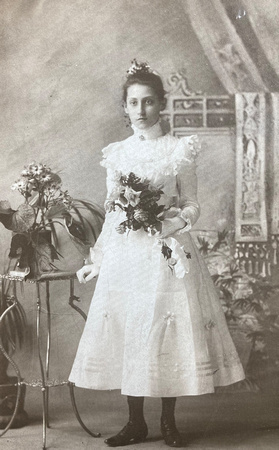 While my mother took care of my grandparents in the house on S. 35th Street, Paul and I were entertained by various relatives in the area.  It was summer so school was out.  One day we would go to the Butlers or the Smiths.  On another day, our Aunt Norma (who was actually my dad’s first cousin) would take us to museums or just head over to her house and do some art projects.  She was an old maid school teacher who would be right at home on the TV show Hoarders.  She lived with her mother, Aunt Laurie, and the house was filled with her collections of stuff, all of which were intended for use in her classroom.  She drove what Paul and I thought was an ancient vehicle—a 1948 Buick or some such auto that would be deemed a classic in today’s world.  The back seat was enormous and many afternoons, we found it very easy to nap on those cushy seats.

Grandpa lived another two years after Gram died, and I am sure he always felt an emptiness in his heart.  I remember our family making phone calls to him in Louisville but only on special occasions.  The last call I think we made was on his birthday shortly before he passed.  Back then, “Long Distance” was expensive, so phone calls with distant relatives were rare.  The phone rang one evening in early December of 1963.  The neighbor had not seen Grandpa for awhile and tried knocking on his door with no response.  I think she had a key, so she went inside and found him slumped in his chair.  They said it was a heart attack, but his cancer had returned despite the fact that his prostate had been removed in 1950 when he was 70 years old.  Our parents flew to Louisville for the funeral while Paul and I stayed with our grandmother (Nana) in Anacostia.  In retrospect, we were very fortunate to hav such loving grandparents even if only for a short time.